Manuel Gómez Calzado, without doubt the person with most crane-watching hours behind him in Extremadura, has reported the sighting of a Sandhill Crane (Grus canadensis) in his personal blog (grullas veo). The bird was seen on 4 November 2011 grazing stubble in a flock of ten Common Cranes (Grus grus) on the estate called Don Benito between Torviscal and Palazuelo (Badajoz). He explains in the blog entry that the bird was only about 200 metres away, the visibility was perfect and he was able to take in all the plumage details for about 5 minutes: clearly smaller in size than the Common Cranes alongside, a paler grey colour overall, a bright red bald patch on the crown, no black in the neck and dark patches on the wing coverts, a characteristic of this bird's winter plumage. When it took flight its smaller size again stood out against its bigger cousins. This description suggests that it was not a young bird. Manolo Gómez returned to the area on following days but could not relocate the bird. After word of the finding got out, other birders flocked to the area but no one had any luck as far as we know. Although it's a bit like looking for a needle in a haystack, there's a lot of winter left for looking, so there is still hope. 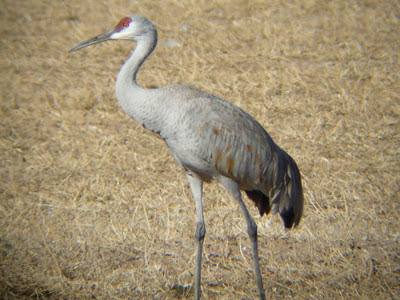 Unfortunately there are no photos of the Extremadura bird. If accepted by the rarities committee it will be the first record for Extremadura and Spain.

This means that, with the latest Badajoz sighting, there have only been 12 Sandhill Cranes seen in Europe, four of them in 2011. Our heartfelt congratulations therefore go out to Manolo Gómez Calzado for this memorable find, just reward or so many years watching his beloved cranes in the field. Note also that Manolo was the first person to see a Demoiselle Crane (Grus virgo) in Spain, from 4 to 14 February 1996 in Navalvillar de Pela (Badajoz), later seen on 7-8 March in Gallocanta. In this case a feral bird cannot be ruled out. In any case it was the first accepted record of a Demoiselle Crane in Spain, a species that bred in the past, with the last Iberian records in Badajoz back in 1924.
Posted by Javier Prieta at 18:56