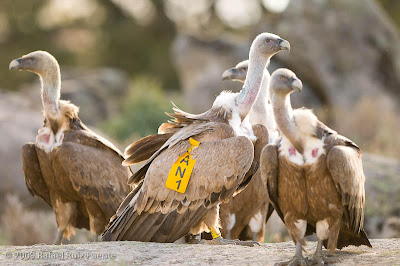 More and more tagged and/or ringed Griffon Vultures (Gyps fulvus) are now turning up in Extremadura. This species is marked in two ways: wing tags and colour rings, both with alphanumeric codes. As with other bird species the local group SEO-Cáceres has begun to record observations of tagged/ringed birds seen in Extremadura. In most bird species the number of birds is too low to be representative. This is not the case of the Griffon Vulture, which has by now produced enough observations to make a provisional analysis of the sightings. 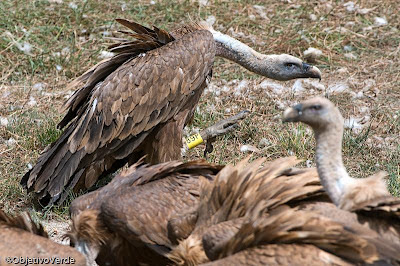 Griffon Vulture (Gyps fulvus), a 4th year bird ringed at the Wildlife Refuge Centre of Burgos on 12.11.07 and photographed in Serrejón, Monfragüe, on 10.08.10 by José Luis Rivero/Objetivo Verde. 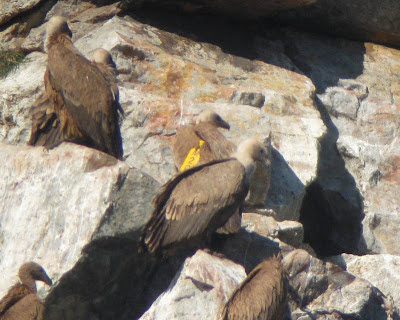 The culled information now adds up to 49 different birds seen between 2008 and 2011. In some cases the information is partial: for eight birds the ringing site is unknown and for another twelve the age. The mode case is the observation of each individual once or several times in the same site in a single year. The longest stay was 2.5 months; two birds were seen two years on the trot; and four birds were seen in two different sites within the region (three in Monfragüe and Canchos de Ramiro and one in Monfragüe and Las Hurdes). Most records have come from Monfragüe (41 birds, 84%), with some records from Canchos de Ramiro (5), Hornachos (3), Las Hurdes (2), La Vera (1) and Valle del Jerte (1). Monfragüe's majority share of the sightings is due to the fact that it hosts the biggest regional population of Griffon Vulture (about 800 pairs in 2008) and is also the site most visited by birdwatchers. Griffon Vultures (Gyps fulvus) and Cinereous Vultures (Aegypius monachus). 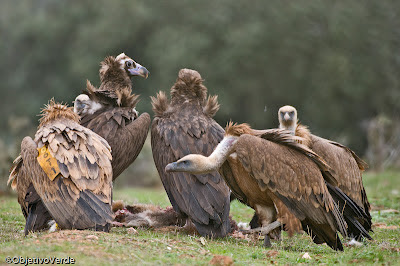 Origin of tagged vultures. In Extremadura tagged birds have been seen from two countries: 47 from Spain (yellow tags) and two from Portugal (green tags). White tagged birds from France have also been seen but without being able to read the code. The Spanish birds came from 13 different provinces, mainly from the northeast, pride of place going to Navarre with 11 birds. Fourteen of the birds came from wildlife refuge centres, including all the birds from Burgos, Cáceres, Andalucía and Portugal. Another three birds came from a reintroduction scheme in Alicante and the rest from diverse wing-tag monitoring programmes from Castellón, Aragón, Basque Country and Navarre. 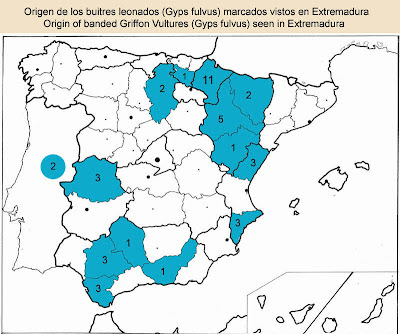 Age of tagged/ringed vultures. Expressed in calendar years, i.e., the year of birth is the first calendar year and another year is added on each 1st of January thereafter. Thus, a bird born in 2008 would be in its fifth calendar year by 2012. Few birds were tagged as chicks in the nest, so the ageing is based on plumage; it is therefore guesswork in some cases. The graph therefore shows the certain ages in red and a minimum known age in blue. Birds aged two to four are the most commonly observed age range; there are no records of birds in their first calendar year. Observations fall away after the fifth year. As for adults, only two birds from the Los Hornos Wildlife Refuge Centre (Sierra de Fuentes, Cáceres) have been proven to be breeders, hence possibly born in Extremadura. 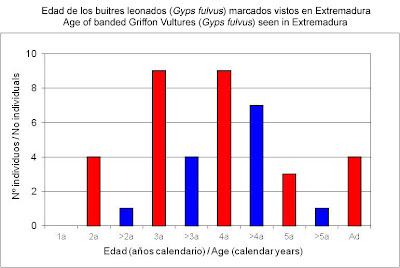 Phenology of the tagged/ringed vultures. Observation effort is uneven throughout the year so this introduces a bias in the results. The peaks in spring and troughs in summer may be as much a reflection of the number of birdwatchers visiting Monfragüe as the movements of immature Griffon Vultures around the Iberian Peninsula. The back histories of the birds seen often have gaps, indicating only the ringing dates and not the monitoring thereafter. Nonetheless, some of the more complete back histories do seem to show a displacement of birds from northeast Iberia to Extremadura in winter-spring, with a return flow to the northeast, even to the French Pyrenees, in summer-autumn. Publication of the results of these tagging and ringing projects will no doubt clear up these matters and other questions. 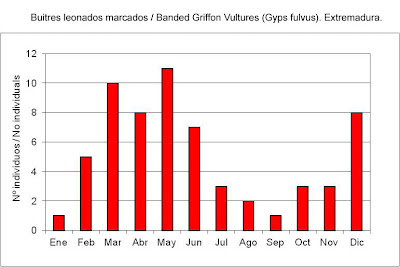 Acknowledgements: our thanks go to all observers who have taken the trouble to read the ring codes and wing tags and then pass on the information. To Javier Briz for compiling the readings and finding out the back histories. To everyone who has helped to fill in these back histories, especially Álvaro Camiña and Maquia Ambiental.
Posted by Javier Prieta at 14:36