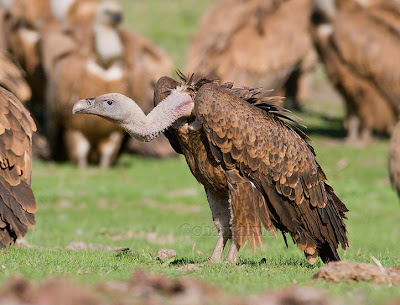 An immature specimen Rüppell's Vulture (Gyps rueppellii) was photographed on 12 October 2012 at Aldea del Cano (Cáceres) by Sebastián Molano. This is the sixth sighting in Extremadura of this African vulture species, considered rarity in Spain, which was also reported in this blog. It is also the fifth consecutive year since 2008, of sightings in the region. Altogether, there are five accepted records in Extremadura (May-June 1992, May 2000, June 2004, May 2008, January 2009 -a possible hybrid-) and four possibles (June 2010, June and August 2011 and October 2012). Considering the difficulty in identifying the species, especially immatures, the abundance of vultures and the lack of areas visited by birders, it is likely that the presence of this species of vulture spotted in Extremadura is regular but scarce. 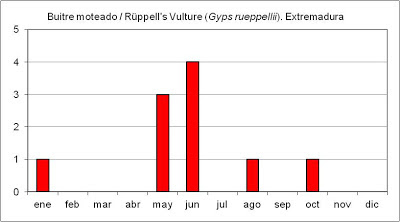 From these nine observations, it shows a predominance of sightings in May and June. In terms of age of the nine birds observed, five were immature and four adults or subadults. This high proportion of mature birds digresses from of the pattern observed in Tarifa (Cádiz), area with the majority of sightings in Spain, is clearly dominated by inmature birds (Javier Elorriaga, in litt.). It's really suggestive of the possibility of Rüppell's vultures breeding in Extremadura. However, with such a small sample it is impossible to obtain any conclusion.
Posted by Javier Prieta at 08:58