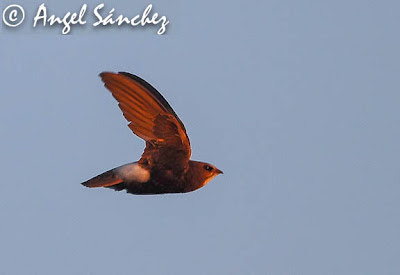 Little Swift (Apus affinis). Cádiz coast. 25.05.2012 (Ángel Sánchez).
On 20 June 2012 Extremadura clocked up another new species: the Little Swift (Apus affinis). Almost inevitably the bird was seen in Alange (Badajoz), a site that seems to have something special for swifts: it probably boasts Extremadura's biggest Alpine Swift colony (Tachymarptis melba); White-Rumped Swift breeds there on a regular basis (Apus caffer); Pallid Swift has been proven to overwinter there (Apus pallidus) and of course the Common Swift (Apus apus) is a regularly breeder. The single observer was José Antonio Román, one of the two persons who most consistently managed to spot the Sandhill Crane (Grus canadensis) that wintered in Extremadura last winter.

For the present the identification is deemed to be provisional, awaiting the verdict of SEO's Rarities Committee. The corresponding description has been submitted and we have had a chance to read it. Everything points to a correct identification (compact shape, similar to a House Martin, broad white rump, white throat, peculiar flight and straight-ended tail with no fork, etc.). There might possibly have been a second bird but this is not certain. The bird was seen only on 20 June; on four subsequent visits up to 27 July it didn't show. White-Rumped Swifts were seen on every visit.

The Little Swift has long been expected to turn up in Extremadura. Up to now we know of only one unconfirmed record of a bird seen on the border with Portugal (River Gevora, La Codosera, Badajoz), though the record was never published or sent up for acceptance, neither in Spain nor Portugal.

The Little Swift is still classed as a rarity in Spain, even though it has now been breeding on a regular basis for over a decade. It is a widespread species throughout the whole of Subsaharan Africa and India. In the C20th it colonised north Africa and is now common there too. In 1971 it bred for the first time in Turkey. In Spain the first certain record dates from 1981; it has probably been breeding in Cádiz since 1996, though the first certain breeding record dates from 2000 (captured birds with a brood patch). In 2004 a new colony was found, again on the coast of Cádiz, where they are now regularly ringed. In 2009 another possible breeding site was found in Seville province. There may also be a fourth breeding colony in Marbella (Málaga). The northern expansion is therefore continuing and the bird now seems to be here to stay in Andalusia, which accounts for the bulk of the sightings. Up to 2009 41 records of 142 birds had been officially accepted in Spain, although this is almost certainly only the tip of the iceberg. An idiosyncrasy of this species is the fact that it regularly overwinters. Although sightings peak in summer there are also year-round records.