A RÜPPELL’S VULTURE IN MONFRAGÜE 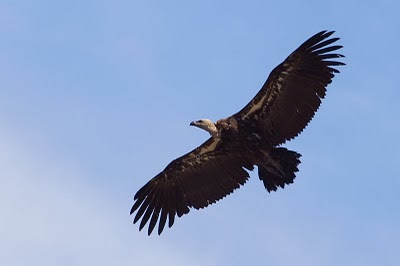 The normal range of the Rüppell’s vulture(Gyps rueppellii), also known as Ruppell’s Griffon or Rueppell’s Vulture, takes in Subsaharan Africa, north of the equator from Guinea to Tanzania. It is catalogued worldwide as Near Threatened due to its recent decline. It is considered to be a rarity in Spain with only 31 sightings involving at least 43 birds accepted by SEO’s Rarities Committee up to 2007. Most were seen in Andalucía, especially near the Straits, and further inland. In Extremadura it has been spotted on several occasions although only three records have been officially accepted: one bird in May and June 1992 in Valencia de Alcántara and Santiago de Alcántara, an immature bird in Oliva de Mérida in May 2000 and an adult in June 2004, again in Valencia de Alcántara. Other claimed sightings since 1990 were not accepted. As for Monfragüe there is only one sighting pending acceptance, of an immature seen at the Portilla del Tiétar in May 2008, backed up by on-the-spot photos.

Another immature Rüppell’s has now turned up in Extremadura, observed on 5 and 6 June 2010 in the famous birdwatching spot called Salto del Gitano in Monfragüe. As part of the "Aves en vivo y en directo" (Birds live and on the spot) programme, SEO/BirdLife have been running a weekend and holiday information stand on this spot from 13 March to 6 June 2010, patiently manned by Sergio Mayordomo and Manuel García del Rey. On the morning of 5 June a local guide called Jesús Porras spotted the Rüppell’s Vulture in flight from the lookout point, whereupon it was also seen by the other people present at the time. Ernest García, ex-member of SEO’s rarities committee, happened to be in the area that weekend and also saw the bird on Saturday afternoon and Sunday morning, duly confirming the identification. The photos at the start and end of this blog entry clearly show an immature Rüppell’s Vulture, possibly a juvenile born in 2009 making its first moult. This therefore represents the fifth Extremadura record, all in the months of May and June, at which time immature birds in post-breeding dispersal probably join up with flocks of Griffon Vultures wintering in Africa and return with them to Europe in spring. Nonetheless, adult birds have also been recorded on the border between Cáceres and Portugal, including a bird sitting on a nest in 1998 on the Portuguese side of the border. 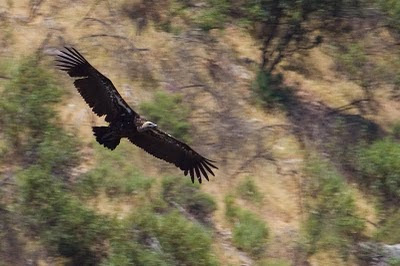