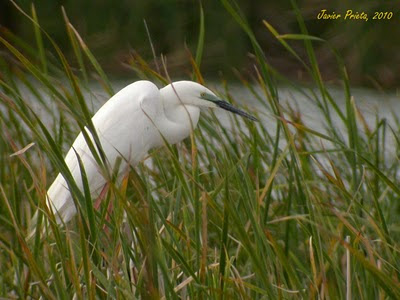 The Great White Egret (Egretta alba) has at last been proven to breed in Extremadura. Inevitably, the site of this long-expected event was Arrocampo Reservoir (Cáceres), where eight species of heron now breed (Grey Heron, Purple Heron, Little Egret, Great White Egret, Cattle Egret, Squacco Heron, Night Heron and Little Bittern), a ninth regularly winters (Bittern) and a tenth has been seen on a few occasions (a presumed hybrid between Little Egret and Western Reef Egret). Numbers of Great White Egret in Arrocampo have steadily built up over the last decade, with a notable roost of 25-30 birds in winter 2009-2010, the biggest flock ever recorded in Extremadura (D. Langlois and S. Langlois, personal observation).

Great White Egrets in breeding plumage have been observed each spring in Arrocampo since 2006, sometimes up to three at once. It is therefore quite on the cards that the species has been breeding there unbeknown to anyone for several years. The breeding has finally been proven by Javier Prieta (JP), Sergio Mayordomo (SM) and Eva Palacios (EP). Suspicions first arose on 12 May 2010 when a bird in breeding plumage seemed to have taken up residence in a reedmace bed (top photo) with another bird in breeding plumage seen elsewhere in the reservoir (JP). On 23 May these suspicions were confirmed when a pair of birds in breeding plumage were seen flying in with nesting material (SM and EP, bottom photo). On successive visits in June and July the pair was again seen winging in and out of the suspected nesting site, impossible to see among the thick vegetation (JP and SM). The site was last visited on 5 August, with few other heron species left in the reservoir and little hope of proving anything either way (JP). But the pair of Great White Egret, with lingering traces of breeding plumage, were still there. They flew in to feed the invisible and clearly audible young several times. The begging calls of the young suggested that at least two were involved. Then came the key moment: for just a couple of seconds a Great White Egret flew up from the nest and landed in a visible site after two short flights. It was a young bird: the first one ever to take wing in Extremadura. 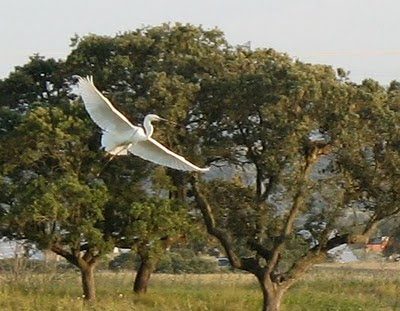 The Great White Egret is a species in clear expansion throughout Western Europe. It was present on the Iberian Peninsula in the nineteenth century but there were no known records from 1894 to 1965 (de Juana and Ferrer, 1996). Breeding in Spain was first confirmed in the Ebro Delta in 1997, where it has been nesting regularly in increasing numbers since 2000 (Fouce, 2003). It has also bred at least in Doñana (in 1998; Fouce, 2003), in Albufera de Valencia (breeding attempt in 2000; Fouce, 2003), in Toledo (three nests in Azután Reservoir in 2009; de la Cruz et al. 2009) and in Huesca (one successful nest in Sariñena lake in 2010). In Extremadura, the species had been seen only 6 times by 1995 and regular sightings did not begin until 1997, with a steadily upward trend thereafter (top graph; Prieta 2007). After 2004 the number of sightings added up to well over one hundred a year and the bird ceased to be a species for which all sightings were recorded. Also from 2004 onwards flocks of over 10 birds were observed in Arrocampo and the Caceres part of Tiétar Valley (15 in 2004, 16 in 2007 and 24 in 2009; J. Prieta and S. Mayordomo, unpublished record). Taken together these two sites make up the best area for the species in Extremadura. 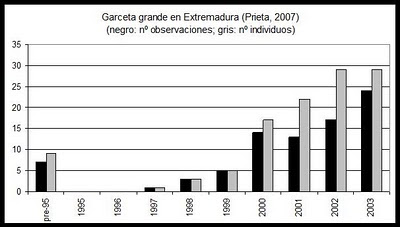