THE JOURNEY OF "SAHEL", AN EGYPTIAN VULTURE 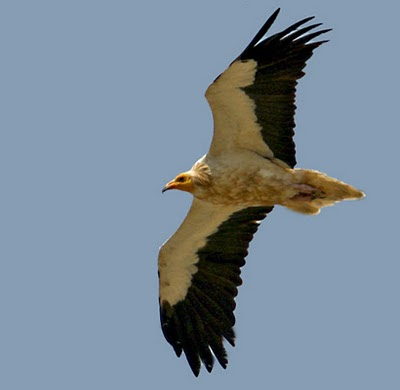 Bird migration is a fascinating subject. We watch with awe as birds of all sizes clock up journeys of thousands of kilometres under their own steam in only a few days, living each year in two (or sometimes even three) different continents. The new technologies, especially satellite tracking, have revolutionised our knowledge of migration. We can now keep abreast of it day by day, find out the routes used, the speed and height flown at, the stopover points, etc. All you need to do is drop into a website. Sitting comfortably in front of a PC screen, anyone nowadays can thrill to the epic journeys, not always with a happy outcome, of storks, raptors, gulls and waders, courtesy of generous promoters who furnish us with the information. In Spain, unfortunately, this information is not always so forthcoming. It's easier to keep track of birds marked in Holland, Estonia or even Australia than others born in our own country. As always, happily, there are exceptions. WWF and Fundación Biodiversidad have set up a magnificent website we can dip into at will to marvel at the odyssey of four Segovia Egyptian Vultures, one immature male and three adults (two females and one male). This is the second year of the project. Unfortunately, one of the stars of the first journey, the male Atlas, died poisoned in Siruela (Badajoz). The female Vega survived and is once more being spied on this second time around.

We recommend dropping into the website "el viaje del alimoche" before reading the following nutshell account of the journey of Sahel, the only inmature of these four Egyptian Vultures and the only one that passed through Extremadura. All of them are now in Mauritania, in the same zone where they wintered in 2009, after clocking up 3000 km, sometimes flying at 95 km/hour at a height of 2000 metres. Sahel was the first to leave the Hoces de Riaza (Segovia) on 30 August, the three adults then following suit on 12 and 15 September. It first headed west for Salamanca, where it spent some time near Ciudad Rodrigo. The real journey begun on 5 September when it headed south through the Sierra de Gata (Descargamaría, Santibáñez el Alto), the Cáceres plains (Coria, Portaje, Garrovillas, Cáceres) and the province of Badajoz (Mérida and Zafra). On 7 September Sahel entered Andalucía; after overflying Sevilla it reached the Straits of Gibraltar on 8 September. In two days it had crossed the whole 400 km of Extremadura and needed only four to leave Spain completely. On 9 September its stepped up its pace, arriving at the Moroccan Atlas mountains after crossing the strait in a nonstop 500 km stage. Here it rested up a while to gird its loins for the Sahara crossing. On 12 September it entered the great desert, passing through Algeria and Mali before reaching its final destination in the Mauritanian Sahel on 20 September. A sixteen-day voyage. Its virtual companions took a little longer, reaching the same destination between 27 and 30 September. Best of luck to all of them. We'll see you next spring.

Read other Egyptian Vulture entries in Birds of Extremadura.
Posted by Javier Prieta at 09:22