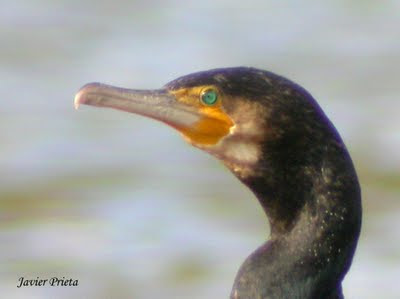 The Cormorant (Phalacrocorax carbo) is a recent coloniser in Extremadura. It must have been a scarce winter visitor for much of the twentieth century, becoming common only as from the 1980s (e.g. a count of 804 in 1986). Since then numbers have soared; witness the two national roost-based wintering Cormorant counts, one held in January 1996, producing a figure of 8656 (25% of the Spanish total) and another in January 2003 with 12,265 (18%). In both cases Extremadura was the region with most wintering Cormorants in Spain (Prieta, 2007).

It didn't take long for the first nests to be found in Spain (del Moral and de Souza, 2004). Before 1990 only a few one-off breeders were known from the Medas Islands off the coast of Girona in Catalunya. The first inland record was a failed breeding attempt in Santillana Reservoir, Madrid, in 1989. The first breeding record in Extremadura involved a weakly-flying pair that produced two chicks in Valuengo Reservoir, Jerez de los Caballeros, in 1993 (F. Gragera). Similar one-off cases recurred in other parts of Spain until, in 1997, the first breeding colony was found on Navalcán Reservoir, Toledo. By the beginning of the C21st there were several established colonies, adding up to over 40 breeding pairs. The first Extremadura colony of 10 breeding pairs was found in 2002 on La Serena Reservoir(Prieta, 2007).

The first and only national count of breeding Cormorants dates from 2007 (Palomino and Molina, 2009), producing a total of 532 pairs in 11 Spanish sites. The main population has built up in Toledo, with 4 colonies and 214 pairs, the lion's share of them in Rosarito Reservoir (202 pairs). Badajoz accounts for the second-biggest population, 3 colonies with 132 pairs: 102 at La Serena Reservoir (on dead Holm Oaks where the River Esteras flows into the reservoir, in the municipal district of Capilla), 26 pairs at the reservoirs of Valuengo and La Albuera (River Ardila, Jerez de los Caballeros) and 4 pairs on the River Guadiana (Valdetorres). The only breeding record in the province of Cáceres was a failed attempt on the River Tagus in the National Park of Monfragüe; a pair built a nest on a dead Eucalyptus tree in May 2006 without any signs of an ensuing clutch (J. Prieta).

By 2011, four years after the abovementioned count, news has come in of the three Extremadura "colonies", although it should be made clear that there has been no official regional count of the species. La Serena Reservoir recorded unprecedented figures. In mid-May Xurxo Piñeiro and María José Valencia counted 250 occupied nests in two colonies: the traditional one on an islet with 240 nests on 29 trees, nearly all Holm Oaks, plus a much smaller colony with 10 more nests. Some days later, on 26 May, personnel from the Regional Council of Extremadura counted 262 occupied nests in the first colony, broken down into 3 subcolonies of 248,11 and 3 nests (Ángel Sánchez, Luis Lozano and Domingo Rivera). This is therefore without doubt one of the biggest, if not the biggest, in the whole of Spain. Conversely, the other two sites recorded in the 2007 count, Guadiana-Valdetorres (Jesús Solana) and Valuengo-La Albuera (Antonio Nuñez), seem to be empty. Or rather they did not even exist any more, since there were no signs of any nests or nest remains in either site. It might well be the case that the so-called colony of the River Guadiana, recorded in 2007, never existed, arising from a mistake in the interpretation of the figures. As for Valuengo, we lack precise information on 2007 and the following years, but it would seem in principle that the 2007 figures were valid.

In sum: the known breeding Cormorant population in Extremadura in 2011 is confined to a single site (La Serena Reservoir) with 272 nests shared out in 2 colonies of 262 and 10 nests. This is the biggest known figure for the species, so the trend is still upwards.