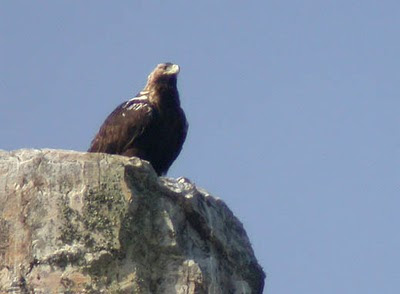 We have just received the results of the Environment Ministry's 2009 Spanish Imperial Eagle census (Aquila adalberti). These figures have not yet been cross checked against official sources so they should probably be taken with a pinch of salt.

It is promising to see that the Spanish population of this threatened raptor, which is just about the worldwide population, put in a good showing again this year. The following graph shows this upward trend, with 12 new breeding pairs and a doubling of the figures from only 10 years ago (from 133 pairs in 1999 to 261 in 2009). 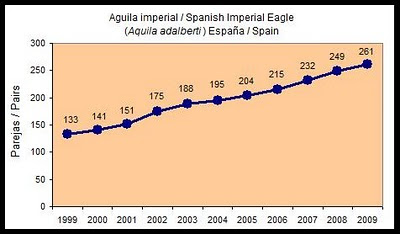 On the other hand we are saddened to see Extremadura bucking this bright trend, with a 16% downturn, 8 pairs fewer, in only two years. No other region has seen a reduction in any year of the last decade; Extremadura has now plunged from the region with most Imperial Eagles to last place. 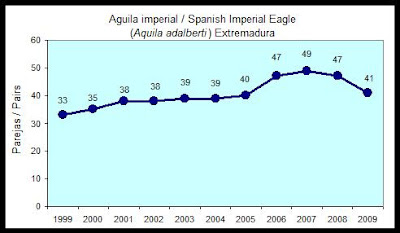 It would now be enlightening if the authority responsible for the conservation of this species gave more information to bear out or rebut these figures. This is unlikely to happen, however, since little or no information is given on the monitoring of threatened species, despite the general interest. Little or nothing was said about the sudden increase from 40 to 49 pairs in two years and we have no idea how it came about. Now we know just as little about this decline or its causes. At least census figures are forthcoming for Monfragüe, showing that the population has held steady at 12 pairs in recent years.

The following table shows the complete breakdown by region from 1999 to 2009. The figures have been taken from the Environment Ministry (figures sometimes differ from one source to another so this one source was chosen for the sake of consistency). Figures are also available from other sources in other regions: Castilla y León (with a detailed map), Castilla-La Mancha (there is a magnificent book and an article about Toledo in Ardeola) and Andalucía (with excellent official information in internet on the monitoring of threatened species). Unfortunately there is nothing similar in Extremadura, despite the existence of a website for this purpose and the public funds pumped into the much vaunted "information society".